Politics
August 5, 2018 admin 0 Comments Ganduje, Hafiz Abubakar, Kano, resignation letter
Hafiz Abubakar, the Deputy Governor of Kano, has tendered his resignation letter over what he described as “an irreconcilable difference” with the state governor, Abdullahi Ganduje.
This is coming on the heels of his speculated move to opposition Peoples Democratic Party (PDP).
He stated in the letter that he would have loved to stay in office till the end of their tenure but regretted that situations and circumstances did not permit him.
“I regret to write and notify you of my decision to resign my position as deputy governor of Kano State with effect from Saturday 4th August, 2018.
“Your Excellency, I would have desired to remain up to the end of our tenure in order to fulfill the aspirations and expectations of the good people of Kano State as expressed in their mandate given to our joint ticket in 2015, but with the current and persistent irreconcilable differences on matters relating to governance and government operations, personal opinions, and the concept of, and respect for, democratic ideals and values, it would be unfair to my conscience, to the good people of Kano State and to you as the head of the government to continue to remain in my position as the Deputy Governor of Kano State.
READ THIS ALSO: What Saraki said after dumping APC for PDP
“Your Excellency would recall several instances I had to draw your attention to the need to understand and appreciate these differences in order to avoid drifting into the kind of unnecessary crisis we are facing today, but to no avail,” the letter read in part.
TheEcho recalls that Abubakar had on July 30 petitioned the police and State Security Service, SSS, over an alleged threat to his life and plans by the state government to stage a rally against him.
Abubakar is a staunch loyalist of Sen. Rabiu Kwankwaso and has been rumoured in many quarters to be the most preferred gubernatorial candidate of the former governor under the platform of Peoples Democratic Party (PDP) come 2019.
See the letter below: 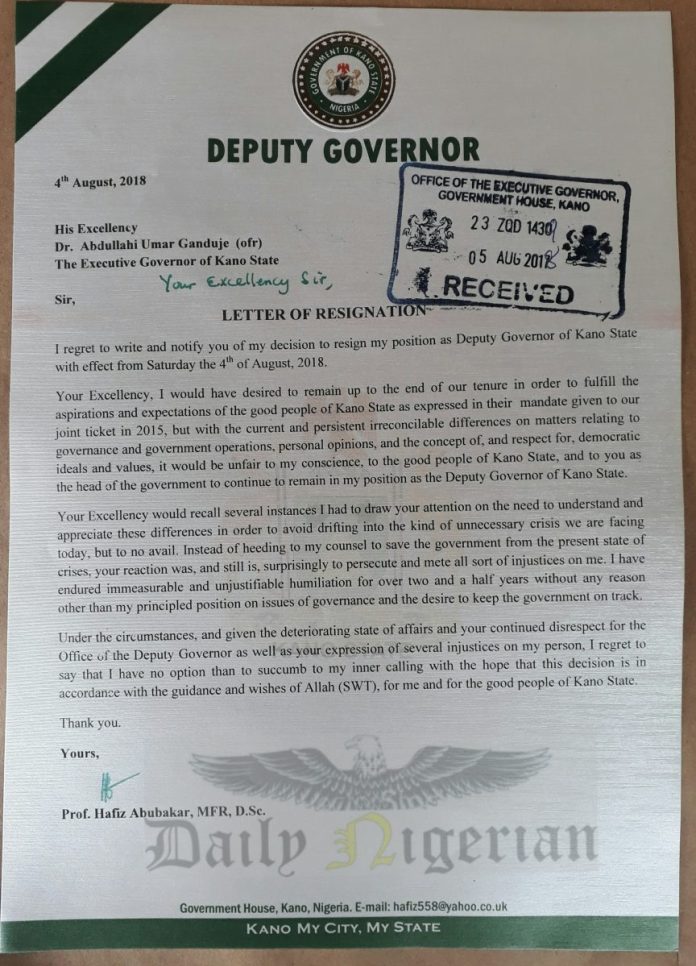